A Wing Flies On

In October 2005, I was contacted by  a man associated with an Everett hotel.  He in turn had been referred to me by Dave Waggoner, Paine Field Airport Manager.  The hotel owner was remodeling the hotel and wanted to adopt an aviation theme.  He had the idea of installing an airplane wing over the entrance as a canopy above the drive.   Did I have any ideas? Fortuitously,  I had two 727s being parted out - disassembled - scrapped at that time at Paine Field.  The hotel owner came to visit me in Hansville, together with his architect and a civil engineer.    I had done some preliminary research.  We explored the various alternatives and challenges.

The wing
Following this meeting, I conducted various feasibility studies, researched the wing structure, and arrived at a two post mounting scheme.  I calculated lift and drag loads, and column bending moments for the UBC design conditions, and evaluated the wing's orientation relative to the prevailing high wind directions.    I suggested a contractor, my good friend Jeff Akridge of Columbia Pacific Aviation in Moses Lake.  I had worked with Jeff for many years and greatly respected his amazing capabilities.  In addition, Jeff was scrapping out these two airframes.  After further consulting with the architect and engineer, the County Building Department,  and working up cost estimates, the hotel owner decided to proceed.

I modeled the support system after the passenger loading bridge at the Edmonds Ferry Landing.  I spend many hours on the dock there waiting for the ferry, and copied the central column, plate, and four support arm scheme.  The arms put major loads into the wing's major strength areas - the front and rear spars, with the plate picking up the lower inspar skin and ribs.  We picked the area in the vicinity of the wing jack point, a known  high strength location.  A lot of  study had to be done with regard to the cut line and how to handle the landing gear location, especially, the main landing gear support beam, and the inboard flap inboard jackscrew location.  Eventually, the wing was cut along the side-of-body line, and the flap jackscrew was retained, as were the landing gear doors.  Jeff did a tremendous job -- as usual !

Support structure attached to the wing ---  Inboard  and  Outboard


The first week in May 2006, the newly fabricated support plates and arms were installed, the posts were set at the hotel, and, on May 4,  the wing was successfully moved to, and installed at the hotel location.  The 727 has a flexible wing, and there was a lingering concern throughout the project that the wing would have a pronounced sag in the middle. This never occurred.

The Midnight Ride of Paul Revere

Arrival at the hotel, and craning into position 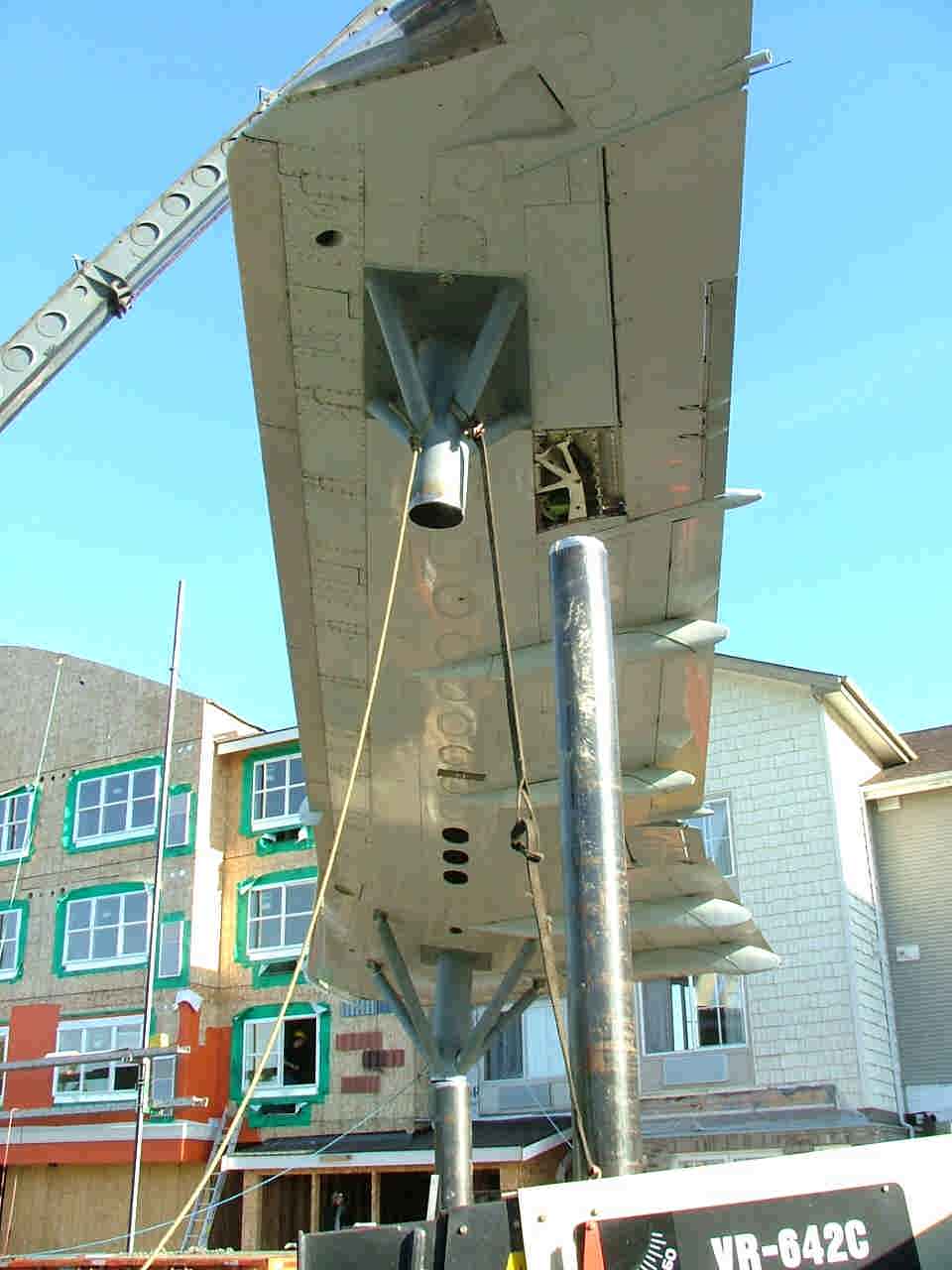 Although it's always sad to see a beautiful flying machine end its flying days and get scrapped, in this case, at least,


The Wing Flies On !

The Wing from the Hotel, after completion.

You can visit the 727 wing at the Everett Best Western Hotel, 10210 Evergreen Way (Highway 99) on the west side of the road, just north of the Evergreen Mall Way cutoff.  It's  been  renamed the Navigator Hotel.